Monday we both worked for several hours. The phones were crazy busy and David asked me to work. I had nothing else planned so I said yes. Jesse hauled rock and worked on the Ideal Cabin.

Tuesday it started to snow again. 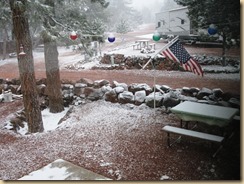 I worked a few hours on Tuesday and Jesse worked on a shed for a few hours. It snowed most of the day off and on but didn’t amount to much.

It continued to snow on thru out the night and on Wednesday and all total we got about 4 inches. 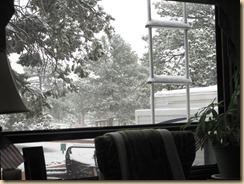 We ran out of water so both Jesse and David hauled water all day. David found the problem. He had some leaks that needed to be repaired. 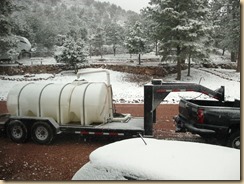 I worked in the office because we had a group of about 12 rigs coming in.

I worked again on Thursday and Friday. All the snow was gone. We have been here 17 days and have had about 14 inches of snow. I am ready for it to warm up!

The guy showed up to look at the truck. Jesse spent the afternoon with him. Then we got them checked into their cabin for the night. He called Jesse on Friday morning, and said he decided not to purchase it. So it’s still FOR SALE!

So we haven’t done anything really blog worthy all week.

Saturday I only went into the office for about 2 hours total.

Jesse and I went into Colorado Springs.  We had some errands to get done. We got the car washed, went to Pet Smart for dog food.

Then we headed to La-z-boy Furniture. We wanted to purchase new recliners and a sofa for the RV. We found something we liked and it is on order. Now we have to wait 6-8 weeks for it to come in. I really don’t like waiting for things like that, but I have no choice.

After all that shopping we were hungry so we went to Red Lobster. I have been wanting some fried shrimp and it was as good as anticipated.

We rented some movies and purchased ice cream for dessert and headed home.  We saw “The Impossible” and “Guilt Trip” they both were very well done and enjoyable.

Today I worked again because we had another group arriving. Jesse returned the movies and got a hair cut.

Tonight we have some great TV to watched so I am going to go and do that.