This past week was the Thanksgiving luncheon at work on Monday. I was surprised that they were able to feed all of us in the 1/2 hour time period.

It was all very organized and efficient and the food was tasty.

Mr. B is doing physically better, but he can not control himself and urinates whenever he needs to. After Jesse waking up two mornings in a row and stepping in puddles of pee he was really upset to put it mildly. We have decided to let him sleep in the kennel, Mr. B not Jesse. Now that he is eating and drinking I have started to give him the meds for incontinence, hopefully that will do some good.

On Wednesday I was coming down with a cold and just was not feeling well, so I left work early. When I got home I ate some lunch and then took a nap.

Thursday was Thanksgiving and we had made plans to share dinner with Bob and Barb Williams at our place. Barb was making a sweet potato casserole, squash and pies for dessert (cherry and pumpkin). I made the turkey, stuffing and mashed potatoes. We had a very nice meal and the company was great.

After dinner we played Sequence and Bob and I beat Jesse and Barb 2 to 1. It was a fun day, thanks guys for sharing with us!!!!

For the next two days we just relaxed at home, I did laundry and nursed my cold. I am feeling better, but not normal and it’s back to work tomorrow.

Update on Mr. B .. Thanks for all the prayers and good thoughts ...

I am very happy to say that he seems better today. He was perky when we got home and he took a large poo.

Yesterday he ate and was drinking again. He ate breakfast this morning and dinner tonight. Hopefully he is on the mend, and this doesn’t happen again since we do not know what is wrong.

Work was the same, not as hot because it has gotten cold here. 38 degrees when we left for work this morning and the same when we went home.

Tomorrow we are suppose to be having Thanksgiving dinner on Amazon. I will let you know how it is.

The wind never stops … We have been rocking for days. At times the wind is a breeze, but mostly high winds. I really know how Dorothy made it to OZ.

Of course we have been working 4-10 hour days and by Wednesday we are really tired. See for yourself, that’s a glass of wine in his hand and he is zonked out. 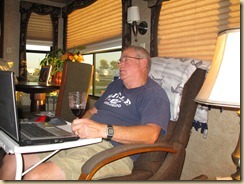 We do not do much, mostly we just do laundry, clean the house, buy groceries and I prepare meals for the work week.

Last Friday the 11th, we went out to eat with Barb and Bob to a local place in Coffeyville called Lannings. It was nothing special but the food was tasty.

After eating they came over to our place and we played hand and foot. The girls beat the guys the 1st game and then the guys won the 2nd, no rubber game was played. After the games we had cherry chocolate dump cake for dessert. It was a fun night!!

Mr. B has not been his normal active self for several months now. He also has been urinating in the house as I have mentioned. We bought him a kennel for during the day and look who likes it. 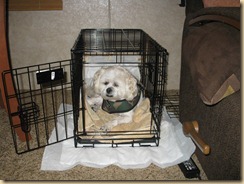 We took Mr. B to the local vet about 3 weeks ago to have a urine test taken to see if he had any infections. They found everything to be normal.

He continued to get worse and started to not eat very good. On Thursday 17th we took him to a vet in Independence who could take blood and review the tests right in his office. Again found nothing abnormal. He gave up some vitamins for him and gave us some incontinence meds to give him.

We took him back to the vet today because by this time he was dehydrated and hadn’t eaten anything in two days and could hardly walk. He suggested we take him to K-State University Veterinary Clinic which is 31/2 hours away. He called them to make an appointment for us. We left his office ran home to pick up Bayer and Buddy and we took off.

When we got there it was just a few minutes before we were called into the exam room. They took a history and examined him.

They took more blood and urine and ran tests on all these things and they took X-rays and found nothing. They gave him some IV fluids and sent us home with some cans of food that he may eat. They said they could do other tests, a sonogram, an  MRI, and admit him to the ICU, but they had no realistic ideas as to what was wrong.   We decided to just take him home where he would be comfortable and hope for the best.

We have no answers and really feel at a loss, but we are hopping we can get him back to eating and getting better. Jesse didn’t think he would make it thru the night but he is hanging in there.

Today was peak season kick-off. That just meant that we came in at 6:30am instead of 6:00am and then at 4:10 we need to listen for the marching band.

Really, a marching band and parade in the warehouse. When we heard it we were to stop work and follow along with the parade to the stage that was set up. Then they did the usually Ra-Ra- Ra build up.. Then Santa, aka, plant manager gave away a lot of nice prizes. 19 and 32 inch flat screen TV’s, IPods, Cameras and Video Game Systems to name a few. Then they played some games and the people participating won $25 Amazon gift cards.

We are still hanging here in Coffeyville. Not much going on. We have completed week 5 and only have 7 weeks left. The work is tedious and long but the days go by fast.

Last Saturday evening they had a workamper get together at the local Pizza Hut. The party room was reserved for 6pm and when we got there with Barb and Bob at 10 minutes till there were no seats left. We decided to just get a booth and invited another couple looking for seats to join us. I don’t think they were expecting so many workampers to show up because we over ran the place with well over a hundred of us. Anyway the pizza was good as was the company and we had a nice evening.

The past couple of weeks have been a bit slow at Amazon. Sunday they sent the whole shift home 2 1/2 hours early and told us to come in 2 hours late on Monday. Then on Monday they asked if anyone wanted voluntary time off for Tuesday and or Wednesday, Ginger took Wednesday but I stuck it out for the whole week.

Amazon still has 2 more groups starting and “peak season” will break out here any day. They say there won’t be much warning when we will start receiving over a million units per day. Of course I don’t know what a normal amount per day is so I have nothing for comparison.

I have never been a fan of the day/night shades in most of the RVs and neither of us have been a fan of the clunky window treatments with the valances and lambrequins. So after many discussions we ditched the lambrequins and Ginger is going to make curtain side panels as a replacement. We also ordered 1 inch faux wood mini blinds from SelectBlinds.com to replace the day/night shades. The blinds are supposed to be in today and we post will some photos after the job is completed.

We took Mr. B to the vet’s last week. He can’t or won’t hold his pee-pee for more then about 2 hours. We are just sitting here and he squats to pee right in front of us. We thought he may have an infection….But the vet says no infection. We ordered him a crate and will have to crate him again.

We took Buddy to get groomed yesterday and he looks good.

That’s about all for now. Take care everyone!