The week went by fast .. On Wednesday I had an appointment to have my hair cut. Jesse stayed home waiting for the repair man to come by and look at the brakes on the Kram-a-lot. He said that we didn’t have any. The guy said that it was oxidation on the terminals he cleaned that up and said the magnets were getting power.

Jim and Joanne went to San Antonio as Jim had a doctors appointment.

Once I got home from the hairdressers Jesse and I went to Whataburger for lunch. This was our 1st visit and Jesse thought it was a good burger, I just had French Fries.

I made dinner for the four of us today, making mac and cheese, green salad, asparagus, elk steak and apricot chicken. 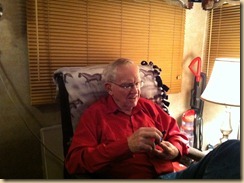 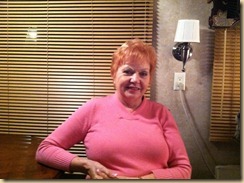 On Thursday we all went for a ride to Bandera. Jim needed to pick up a belt that he was having repaired there. On the way we stopped at Camp Verde for lunch. 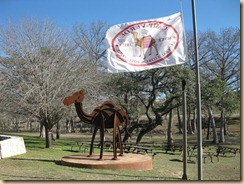 Nestled in the Texas Hill Country, on the banks of the Verde Creek, the store was first established in 1857. The two story stone structure of Southern colonial design is full of things to buy. Originally, the general store was established to offer goods and services to the soldiers stationed at Fort Verde, a mile to the west. 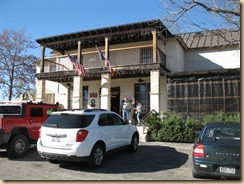 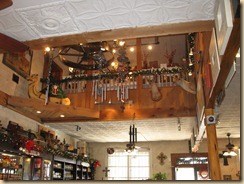 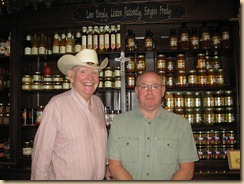 They have a small lunch only open from 11am-3pm. The prices for the food was very reasonable and quite tasty but we waited about 1 hour.

After we returned home we went to our own rigs and relaxed for the evening.

We left Ingram around 10am this morning. Saying see ya later to Jim and Joanne … We had such a good time being with them.

We were just getting hooked up when Pat rode by in her truck. She had some ladies in the truck with her on their way to play bridge, but we got hugs and a promise to see her later.

We got all set up and I made us some lunch. Around 3pm Dan came by to get us and take us to their place.  He gave us the tour of the new apartment they are building, it will so nice for them. We walked across the street to have happy hour with their friends Eck and Dee. Eck has beer on tap, you just need to bring your glass and Jesse was ready.

After about a hour we went home fed and walked the boys then went by Kit and Jerry’s place. They were not at home, but we knew they weren’t far because their rig was open.

So we headed back to Dan and Pat’s. They were still at happy hour, so Jesse was talked into having another beer.

Kit and Jerry dove by in their golf cart and we were able to visit for just a few minutes.

Pat had made dinner for us, so we went back over to their place and had lots of conversation and a wonderful meal with dessert. Thank you both for a GREAT evening!

We didn’t go home until after 9pm and it was a fun day!

Today the weather was awesome, sunny and high of 64. That may not sound wonderful to those in south Texas and Florida, but it’s the warmest, driest weather that we have had in a long time.

Yesterday Joanne and I went to Walmart in Kerrville. We stopped at Wendy’s and brought our guys some lunch home.

I did laundry and just relaxed in the afternoon.

Last night we all went to Mamacita’s for dinner, a very nice Mexican Restaurant. We had been there before when we were here in 2009 with a bunch of RV-Dreamers for a gathering. The food was still good and the company was great but small in comparison.

Today Jesse and I went to Fredericksburg to browse the shops. Jim and Joanne had planned to go with us but Jim was not feeling well today so they stayed home.

This is the trees in the park. The wood one played music while the people were going around. 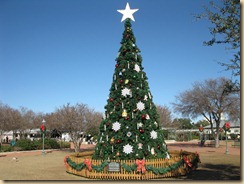 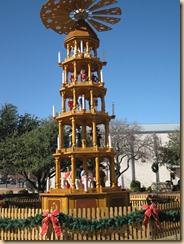 We enjoyed walking around the stores looking at all the things we didn’t buy. We had lunch in one of the local places on the main street.

The only thing we bought today was food, we purchased lunch and brought home strudel and fudge.

Once at home I continued to do laundry. For dinner Joanne made pasta and sauce, I made a salad and bread. She also made bread pudding for dessert and I served the strudel. We all ate at our place because we had a little more room. 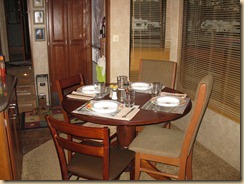 We enjoyed the company and we lingered talking after we all were stuffed. It seems no matter who we are with it’s we are always eating.

We are just relaxing on this Christmas Day, talking to our family and friends on the phone. We will be going to a Christmas buffet dinner with Jim and Joanne at an Inn in Kerrville later.

Last night we went to the club house here at Johnson Creek RV Resort & Cabins for a pot luck dinner. It was very nice and the club house was beautiful decorated for the holiday. All the tables were set and the food was delicious. 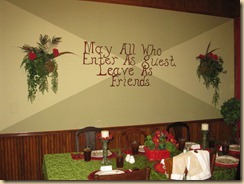 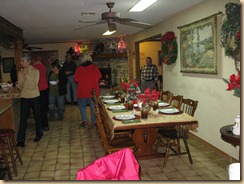 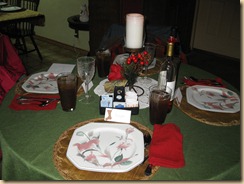 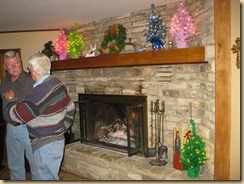 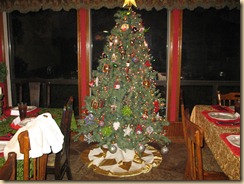 We left this morning at 8:05am, traveled 325 and arrived at Wichita Falls RV Park at 2:20. We are so happy to be out of Kansas and finished with our work at Amazon.

Our last day was suppose to be yesterday, we went in at 6:30 only to be told that we could have the day off on VTO if we wanted and we said SURE!!!! We went to breakfast then back to the RV to relax. I did 3 loads of laundry and packed everything for travel and believe me after working at Amazon that was relaxing.

Once we got moving our travel was uneventful today. I say that because as soon as Jesse started the truck the pressure pro said he had low pressure in one of the tires and he had to get out the compressor and air the tire. He said that it was the pressure pro that made the tire leak air. I guess we should have steel valve stems but we have rubber, so the sensor/transmitter was not on correctly and released pressure. Jesse installed them the other day and aired all the tires in preparation of leaving.

Last Saturday we met with some friends at Pizza Hut to have a meal and have a last gathering before we all would depart this week. 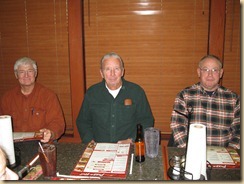 Me, Barb and Lora 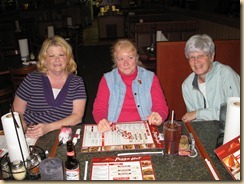 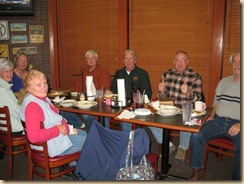 Kay and Ed was a little late arriving because we stopped by to see them on our way to the restaurant to say thank you again for walking the boys for us and to see there new puppy. (A 4 month old schnauzer) That held them up getting ready but it was no problem as we were in no hurry. We had a good meal and great company, we lingered long after everyone was finished eating just visiting and sharing stories. 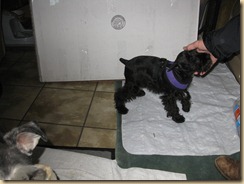 John and Lora were heading to Westleco so we will get together with them while we are in the Rio Grand Valley. Bob and Barb were going to South Carolina and Kay and Ed will end up in Texas to their home.

On the 20th Kelsey turned 18 years of age. I can’t believe she is all grown up and beautiful. This is a picture of her and her boyfriend Kyle. 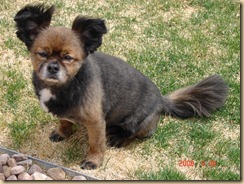 Now that we are not going to be working I hope to blog more often. I am sure it will not be every day but I will try to get in a few times a week.

Well it’s been awhile since I have written ….. It has been a grueling few weeks. Working 10 hours a day really is a toll on the body. We have really not done anything on our days off but, clean, laundry, cook and get groceries.

We were moved from inbound department to outbound. We now pack orders in boxes. Neither of us like it, but we can’t seem to get moved back, believe me I have tried!!

The original 6 that trained in the beginning was Bob, Gary, Norman, Loretta, Jesse and myself. We all would sit together at breaks and lunch, so splitting us up was sad. Norm, Loretta, Jesse and I were being moved to outbound, but Norm and Loretta decided to just quit.

So before they left we all went out to dinner the night before. It was fun to have some social time with them and to say a proper see ya down the road. We went to Jack’s bar and grill. They had a shuffle board game there and 4 of us played, although we didn’t finish the game we had fun. 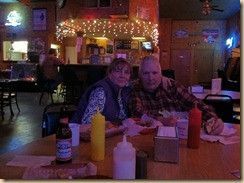 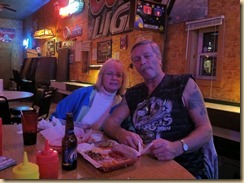 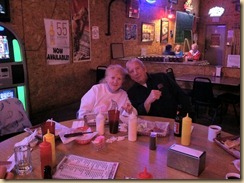 Yesterday was supposed to be our overtime day, so we were up, dressed and off to work. When we got there the parking lot was full!!! Jesse dropped me off then parked the car. Once we got to our work area, we were told that there were too many people and not enough packing machines and that they were going to send people home. I couldn’t get my hand raised fast enough. We were out of there in a flash!

We spent the day just relaxing around. I took down the fall decorations and put up a few Christmas things. I really didn’t want to do much because I would have to try and put them away when we leave. Jesse took the car to get it washed, just to get the grime off it.

It has been very cold here; below freezing at night and in the 30’s during the day. Can’t wait to get somewhere warm.

Mr. B has been just hanging in there. He is lethargic, and still having problems holding his urine, but eating and drinking. He is still quite loving and will let me cradle him just like a baby.