So lets see if I can sum up what’s happened in the last month.

On August 17th we said see “ya down the road” to Bob and Janet. They left with their daughter and grandchildren traveling back to MO with them.

That’s one thing that is hard with this life style. We seem to always be saying goodbye to our friends. The good thing is looking forward to say hello when we see them again.

I worked 6 days straight with one day off and then another 4 days in a row.  Rachelle was on vacation so I offered to work her shifts and mine.

We really didn’t do much the last few weeks. We saw the children and grandchildren whenever possible.

We spent an evening playing spades with Ken and Jean. I was winning most of the game but on the last hand Ken edged me out and won.

Ed and Marilyn left Tuesday, Sept. 4th for Hannibal, MO. They were sad to leave but sure looking forwards to seeing their daughter, SIL and those grandbabies.

Six of us went out to dinner on Monday, Labor Day -  Ken and Jean, Ed and Marilyn and Jesse and I.

On Sunday 9/9 we had our end of season dinner. All employee's and residents of Mountaindale were there and there was so much food. It was very nice and another summer season in the memory banks. 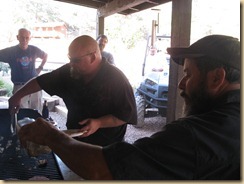 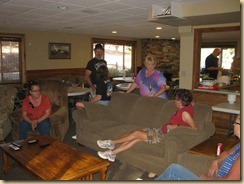 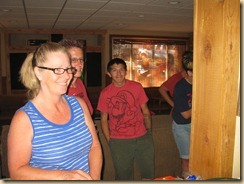 Then on 9/12 Jesse and I left Mountaindale in the rain. It rained most of the day. We traveled 330 miles and stopped in Ellis, KS for the night.

We traveled 9/13 - 370 miles and drove into Sedalia, MO. We were too late to check in at the rally, so we stayed at a small place just down the road.

We got up and packed up and drove the 3 blocks to the rally location at the Fair Ground.  The 1st person we saw after pulling into the gate was Bob Williams. It was nice to see him again.

We were directed to our site and was very impressed with it. We have lots of room 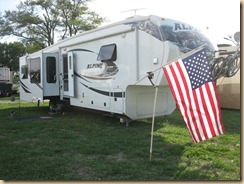 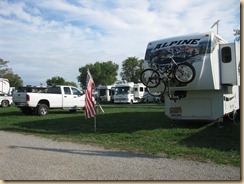 We got set-up had some lunch and then went for a walk to get our bearings. We saw John and Bridget Hatch, Barb Maxey (Roger was off somewhere), Bob and Molly Pinner and Barb Williams. They all are working at the rally.

We hitched a ride back to the rig from Bob Williams. We fed the boys then decided to go out to Kehdes for Bar-B-Que. It was recommend to us by Bob and Janet’s daughter. She is stationed here at Whitman Air Force Base. We found it nothing to write about.

After we retuned home and they were finished with their day Bob and Barb came by our place to visit. We hadn’t seen them since we left Amazon last year.

Today was the day for registration. We registered and also saw Dortha Hall, Donna Green and Sylvia and Glen Avery. We sat around the hall for a while just talking with other attendees.

After a while we went home hungry. I made us an omelet and toast for a brunch.

We took a ride to town and went to K-Mart for a few items and then to DQ for a blizzard.

We are going out to dinner with some friends tonight. I will give you the details on the next blog. 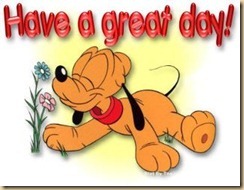 I have been reading your blog for a while and we also are at escapades and would love to meet you guys. We are in R-3.