Today started with Jesse getting up to walk the boys when he noticed that the guys were waiting just outside for him to walk with them. So he took off and I got dressed to walk the boys. I dressed in heavy clothes, winter coat and gloves. I thought it was going to be cold outside, but that wasn’t the case, the temperature was 53.

We walked to the dog park and I was shedding coat and gloves pretty quick. There were lots of dogs there this morning and very hard to keep up with my three.

After returning to the Kram-a-lot I fed the boys and Jesse made coffee.

I took my shower and got dressed while getting caught up with my soap.

Afterwards I wanted to go to Penney’s, so I gave Marilyn a call to see if she wanted to go with me.  She said yes so off the two of us went. We went to Lowes first to look for a closet louver door. I also wanted to get a plant for the front door of the rig.

Then we went to Penney’s. We looked around but i didn’t see what I wanted and decided to go to Walmart to see what they had.

Once we came home Marilyn suggested we come up to their place and have a drink. When we got there Ed was just finishing a shower. We sat and visited for a short while before it got too cool to sit out.

We went home and got the boys and dressed a little warmer then walked up the street to see the golf cart Christmas parade. Our pictures didn’t come out real good but here are a few. 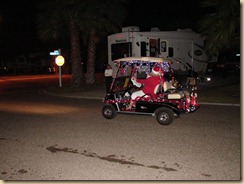 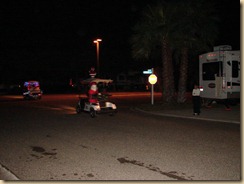 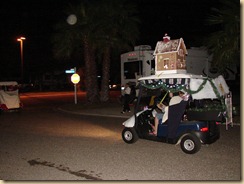 We just relaxed at home for the evening and watched our TV shows.

We are planning a bike ride for later in the week, so after the guys walked this morning Marilyn came by and we went for a bike ride. She and I thought we should get used to riding a little.

When I returned I needed to get a shower and cleaned up because Bob and Lynda were coming over for a visit.  We were really looking forward to seeing them and spending time getting caught up.

I let E&M know when they were coming so they could join us. They arrived and after all the hugs we sat outside until time to go get some lunch.

We decided to go for Bar-B-que at Fat Daddy’s. 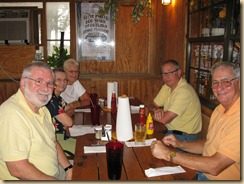 We enjoyed the time we were spending and most of us enjoyed our food.

We then returned to Llano and sat again on the patio talking and laughing. I asked Pat and Dan to join us. Pat reads Bob and Lynda’s blog but had never met them and this was their chance. 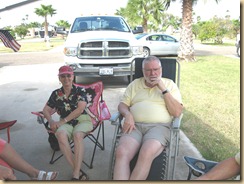 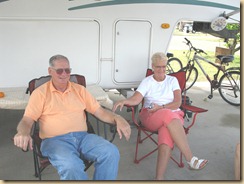 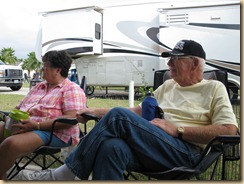 We all talked and talked, at times the conversation got deep, but we enjoyed our time with them very much. As it started to get dusk and cooler they decided to return to Lynda’s sister house in Harlingen.

We were very happy they took time from family to spend time with us. We love you guys and want to wish you a safe trip this fall. They are going over seas for the winter.

Jesse and I watched a movie before calling it a night.

Today we picked up Marilyn and Ed and the 4 of us went to Mingo’s. We had a wonderful relaxed breakfast and then drove over to Progresso.

The four of us were going to get exams and order new glasses. Gilbert had been to this place several times and was very satisfied with them.

We were suppose to be there at 9:30. We were, but the doctor didn’t show up until 10:15. We sat around waiting for him and each picked out the new frames we were getting.

Just after the doctor arrived Heinz, Irene, Gilbert and Louise showed up. All but Heinz were picking up there glasses. 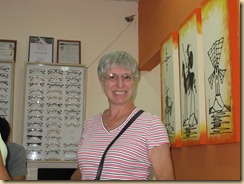 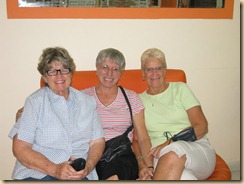 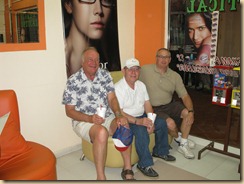 Here’s Ed in the chair with the doctor. 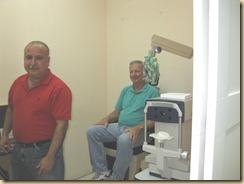 Here is Marilyn taking one of Louise, Irene and me. 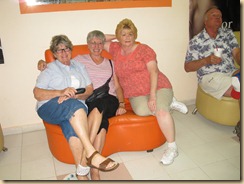 After we had all finished we walked up and down the street before going to Garcia’s for lunch. We were not hungry, but decided to join them anyway. 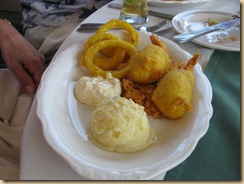 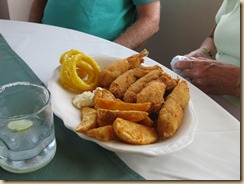 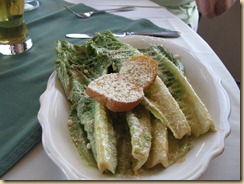 Gilbert and Louise ordered Chateau Breion for two which they cooked table side and was the hit of the meal. 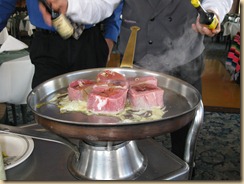 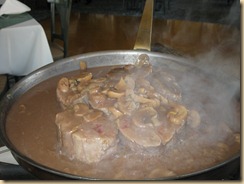 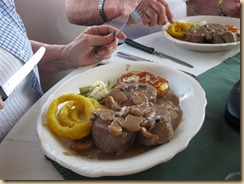 They also made our dressing table side which was very interesting. 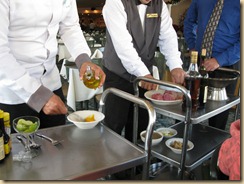 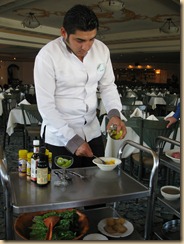 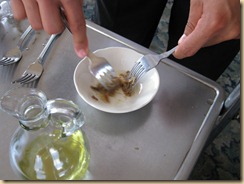 We had a great time with these good friends and look forward to many more. 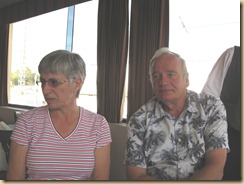 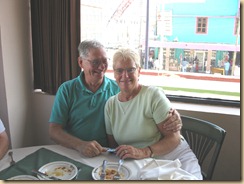 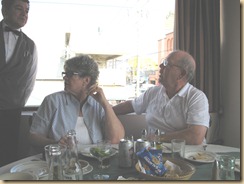 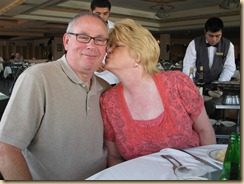 After picking up some more movies we came home. They dropped Marilyn and I at Pat’s so we could visit with her.

We had cocktails on Ed’s patio, then returned home for the evening. It has been a filled filled 3 days and tomorrow will only be more of the same.

Sure looks like fun..You will have to tell me more about the glasses...Sherri needs some real bad. Are they expensive down there? Maybe it would be worth our while in making a trip to that part of the country to get here fixed up???