Yesterday we didn’t do much but hang around the homestead.

Well we actually went out to breakfast at Luck E Star. Then stopped at a road side stand and bought tomatoes and corn, before returning home.

After relaxing for a short while I got busy in the kitchen and made some bread pudding and potato salad for dinner and dessert tonight. I also started some chicken corn soup for tomorrows dinner.

Also during this time I was doing laundry, I did 4 loads yesterday and have more to do today.

Jesse worked on securing the hangers that hold the electrical wiring on our slides. I don’t understand and really don’t need to, as that is a blue job.

Other workampers here do not know about blue and pink jobs, I have had to school many of them, I thought it was widely known.

After all our chores were done and we had rested Jesse built us a fire so we could roast some weenies. 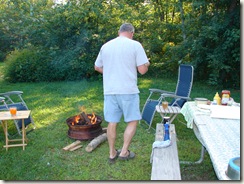 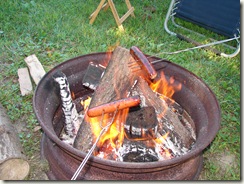 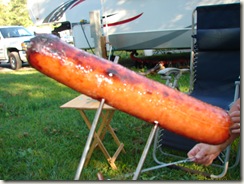 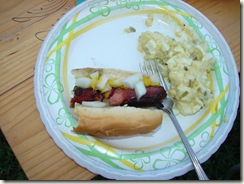 After finishing our meal Darrell and Judy stopped by to say “see ya down the road”. They are leaving on Tuesday. It was nice to have a little more time with them before we depart and go our separate ways.

After we had everything cleaned up we were invited to join Don and Jane at there campfire to sit and visit. 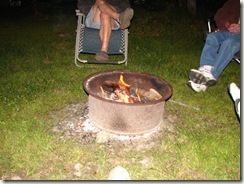 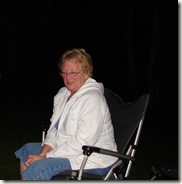 Jesse with our rig in the background 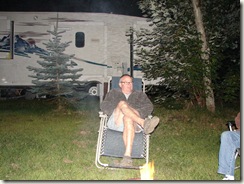 It has been a very relaxing day and we look forward to many many more.