Jesse was up early to walk with the guys it was 48 degrees, the sun came out while they walked so it warmed slightly.

After he got cleaned up he took the truck to get it inspected. It cost $14.50 and took about 10 minutes.

I started to put all the fall decorations away and get out the Christmas. I put up the tree and the few other items I have. I was very sad to see that two of the ornaments I made 35 years ago had broken.

Jesse went over to Heinz’s to see about repairing his bike. I continued to work on the tree. 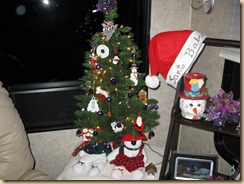 While I had the basement empty, Jesse vacuumed the floor and together we put things back. He also put the lights out on the Kram-a-lot. 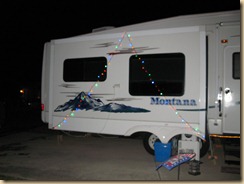 We went over to E&M’s to visit, while there Carl and Linda came over and we sat for a short while. Then it was time for a tour of their 2010 Mobile Suites. It gives you a very warm feeling with the light cherry wood and warm color scheme. Linda also has lots of things around that makes it very warm.

At 5:00 we were going to karaoke night at the rec hall. They served taco salad for dinner for $5.00 per person, then they did karaoke.

There were a total of 12 of us and two new people we met. 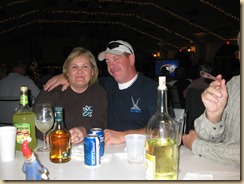 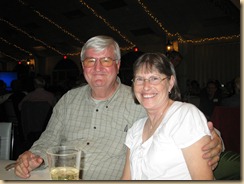 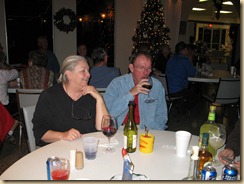 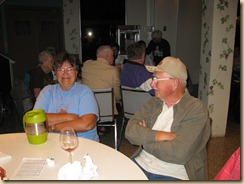 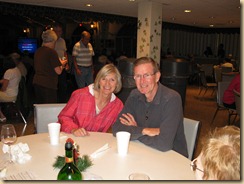 The new couple, he told me his name was Ted, but I think he was telling tales. 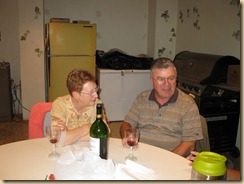 We had a good time Cheryl got up and sang Delta Dawn. 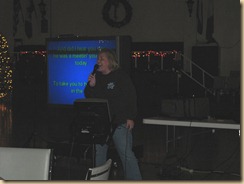 We came home and relaxed for the evening watching Basic Instinct before going to bed.

I left all my Christmas decorations in storage and we are no where near them... Guess I'll have to go out and get a few... Yours look so great! It is really cold here in Arkansas and it is our first winter not in FLorida... I am FREEZING...ha ha Sounds like fun Karaoke and Taco Salad... I'd would have been there! Have fun