Friday we were suppose to go over to Judy’s go through stuff with her in preparation for her move.

Before getting dressed to leave I made stuffed peppers for dinner. That way all I need to do when we get home is bake them and make a salad.

We were on our way when she called to say she was not feeling well. So we turned around and headed to the Alliante Casino. We walked around and played for a short while then headed back home.

After awhile I got dinner ready, I must say it was very good. Green for Jesse and yellow for me. 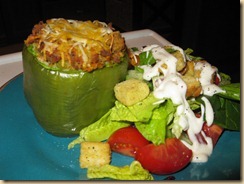 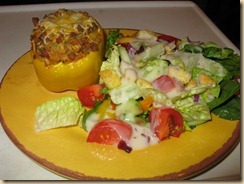 Today when we got up our water was froze. It was 26 degrees outside. We have our hose heat wrapped but it froze at the pedestal.  We had to go to a meeting at 1pm but the sun came up and around 9am we had water.

There were about 16 people at the meeting. They explained about the new sporting clay range and how it works. They want us to be hosts for the groups that will come in to shoot.

Because they have no idea how busy they will be they want us to be “on call” for a 3 hour period of time. We can wait at our RV’s until or if they call. If no one calls we still get credited for the 3 hours.

I think it sounds like a lot of fun hosting groups. Basically they want the groups to be safe and have fun and we are there to see that happens!

After the meeting and tour of the range we came home to watch the football game.

Jesse was very happy that the Ravens won. It was a good game!

I made a  steak for Jesse and a turkey mignon for me. Sides were fresh broccoli and baked potatoes.

It was a fine day!

All that food on this one post! I am getting hungry now. I guess it is off to the fridge to find me something to eat...

I was a little skeptical when you said you were going to be working at a shooting range, but now it sounds like not a bad gig! You just need your temps to be a little higher!