Saturday we worked 3 hours at the Shooting Clay Course. It was raining when we got up, just like yesterday. After an hour and 1/2 some people came in and we met them at the 1st station. It wasn’t raining but everything was wet.

In took some pictures with my phone. The way the fog and clouds looked was really cool. 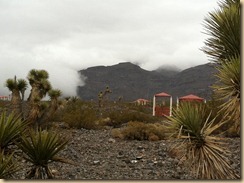 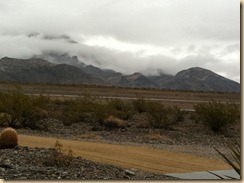 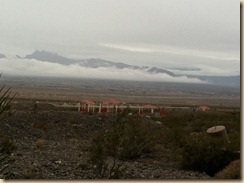 We rested at home for a while then got dressed to go out.

We went for an early dinner of pizza and rented 2 movies at RED BOX. Then we went to the 5pm BINGO and decided to also attend the 7pm round. We didn’t win, but in between both sets I did well on a penny machine that paid for our whole night out.

Sunday we worked 8-2. We sat inside for about 30 minutes then went outside to wipe down the golf carts. It was windy and cool outside so keeping moving was good.

When we didn’t have shooters we would sit in the car to get out of the wind. All in all it was a good day and we enjoy what we are doing.

After work we watched the 2nd movie and then took the movies back and picked up a few groceries.

I made shrimp and pasta in red sauce and a salad for dinner.

Monday we were suppose to meet some friends who were visiting Vegas at the strip. We met Jane and Don when we worked the 1st year at Lake George in New York.

Unfortunately, Jane called to say Don was not feeling well and we will make it another day.

So Jesse and I decided to go to the movies to see “The Impossible”. When we got there the movie time was not what we thought, so we decided to see “Broken City”.

At home we had a light dinner and just relaxed.

Today we were getting our window replaced.

Jesse took off the valance and bind. Then popped the wood frame off. There guys showed up to do the install from Southwest Auto Glass. 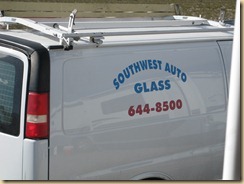 This was the first time they had done a RV window. When Dan called yesterday Jesse gave them the phone number to DRV and Paul Cross who does a lot of DRV’s service work.

Dan was very happy with the information he got and felt confident that he could handle the install.

In no time they had the old window out. 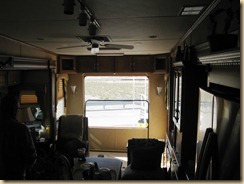 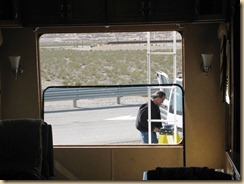 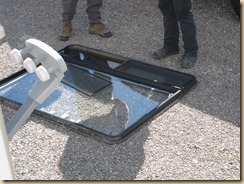 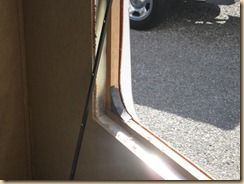 Then they installed the new window 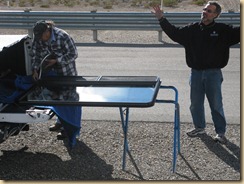 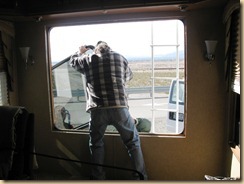 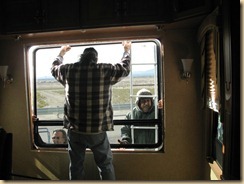 Jesse helped hold the window in place inside while Dan held it outside and the other guy screwed it in place. 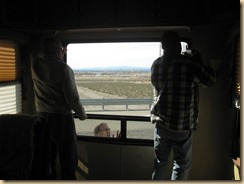 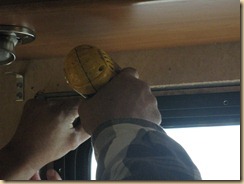 Jesse put the blind and valance back on then went outside to clean the outside while I did the inside.

JOB DONE and it looks great!! 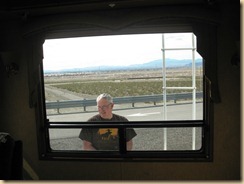 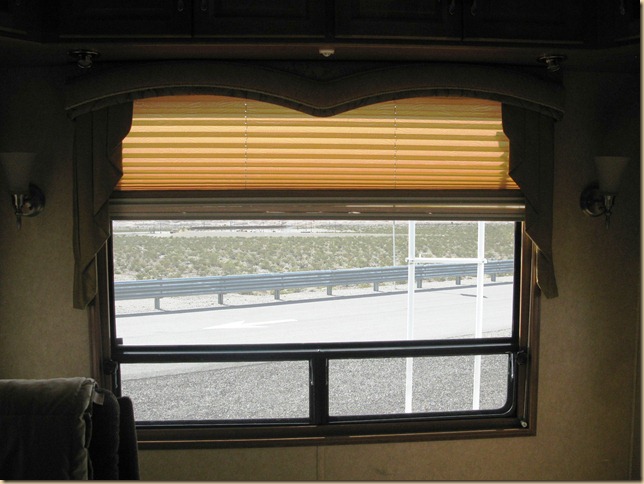 You guys do great work. I know where to go when I need window glass replaced.