Today we both had off.

Jesse was up before me even after our late night last night the boys wanted to go outdoors at 6am, so Daddy took them out. I stayed in bed and after they returned and had breakfast they returned to the bed with me. Just the boys’ Jesse stayed up and computered.

I got up at 8am, shortly after Jesse walked down to the office to get coffee and donuts. We serve them to our guests free of charge.

He brought me one, but I didn’t want it so he ate it too.

After we were showered and dressed we went to IHop for some breakfast. From there we stopped at Petsmart to purchase the boy’s some dog food.

Then on to Manitou Springs. It was a beautiful sunny day with clear skies and a light breeze. Just beautiful!! 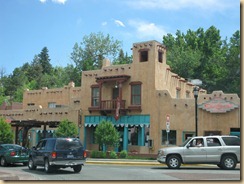 We strolled up and down stopping in a few stores. Jesse wanted to get a hat to wear while working so his head and ears don’t get burned and we found one at the last store we went in. 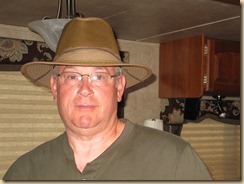 I purchased some garlic olive oil at The Olive Tap, and a strainer for the kitchen sink from The Kitchen Shop. I purchased one last year when we were here and I really like it, so I wanted another for the other side.

I also purchased a stained glass piece that has birds on it. 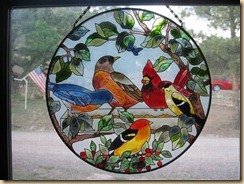 As we strolled we ran into Jackie, Tony and their grandson Alessi. We chatted for a bit while the guys were ooh-ing and ahh-ing over this cycle. 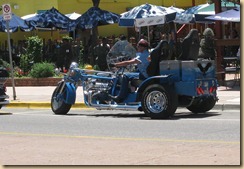 Walking back to the truck through the park we saw some dogs cooling off in the stream. 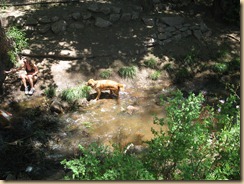 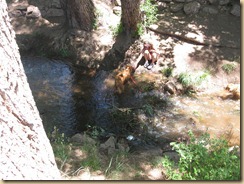 We drove by Old Colorado City to see if Jorges the Mexican restaurant was open yet. It was still closed for remodeling.

Then we stopped by Safeway to pick up a few items.

I made spaghetti topped with home made Alfredo sauce made with Vidalia onions, red peppers and shrimp. I served a salad and warmed Italian bread.

After we cleaned up the kitchen we just watched some TV and relaxed.

We went to Manitou Springs today too. Guess what? John purchased the same hat to protect his ears from sunburn. Great minds think alike! LOL.

It was a beautiful day and a fun place to visit.