Yesterday, Monday, we had the day off and the morning was our usual weekend morning stuff. We decided to go out to a movie, and saw Eagle Eye. It was full of action and kept you on the edge of your seat with all the action. The concept was a little far fetched it think, but maybe not. Maybe we can be watched 24-7 if our government wants to.

After the movie we went to do the grocery shopping. I felt sorry for Jesse walking around the store, because he is still in a lot of pain. I told him to go sit down that I could do it myself, but he wouldn’t listen. He goes back to the doctor on Thursday and I told him to speak up and let him know how much pain he is in. He is not sleeping because of the pain.

After dinner we watched our Monday night shows until time for bed.

Saturday, Jesse worked and I prepared the house for our open house. The boys and I went to Wal*Mart parking lot and sat with Jesse while he had his lunch. We had one family that looked-NO OFFERS.

Our daughter met me at the house after the open house to drop the children off for the night. They had an event to attend in Denver so the children were spending the night with gramps and GiGi.

They were excited to play the Wii. They had the most fun with boxing.

Here are a few pictures of the action 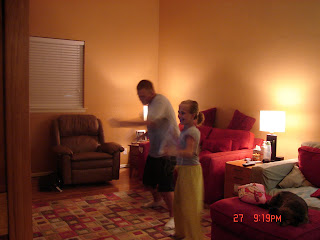 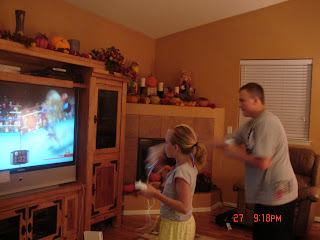 We also bowled even Colt was able to do this one with us. Kacie and Ryan love Chinese food so I called in an order and Jesse brought it home with him. Colt fell asleep and missed dinner. When he got up he was a little grouchy and didn’t want to eat. He has not been feeling to good so I didn’t push it. 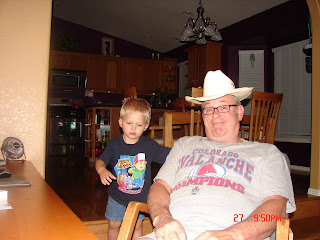 After dinner and the clean up we played a game called Sequence. We played this game with Ed and Marilyn and enjoyed it so much that we purchased it only $15.00. The children liked it also.

After 3 games the girls beat the boys 2 to 1 we had dessert apple pie and ice cream. Always a big hit! Then we watched a little TV until time for bed. The boys slept in the room with the TV and around mid-night I went in and said TV off and go to sleep and they did.

On Sunday I made a 4 layer scrambled egg bake. It was made with fried potatoes and onions, (1st layer) corned beef hash, (2nd layer) poured scrambled eggs (3rd layer) on top and baked it in cast iron skittle for about 20-25 minutes with cheddar cheese (4th layer) sprinkled on top. I served it with toast and jelly and it was YUMMY.

Colt building a house, he was also having a bad hair day 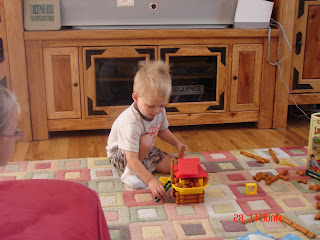 After breakfast, showers and clean clothes we just hung out. The children played Wii and messed around on the computers. I made chili cheese dogs for lunch. Their Mother picked them up around 3:30.

Jesse and I just relaxed and had cereal for dinner. We watched the premiers of Amazing Race, Desperate Housewives, and Brothers & Sisters before going off to bed.

Busy two days for g-parents LOL We had two of ours last weekend and we were ready to take them home Sunday. Good luck on the house we are praying you do well..