Today is our 29th wedding anniversary. Here is a picture from that day. 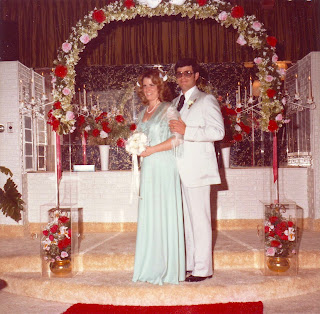 We had a good weekend, although we didn’t do much.

On Saturday Jesse worked and I was home cleaning, cooking and baking. I also read blogs. Once Jesse was home we had dinner of swiss steak, mashed potatoes, gravy, corn, green beans and salad. For dessert I made chocolate pudding and cookie bars. We watched TV and just hung out until time for bed.

On Sunday we were up and doing our usual weekend routine. Then around 11am we were out the door to return rented movies and pick up some Wii games. After that we were off to do the grocery shopping. Once we were home we just messed around the house. I made pasta and shrimp and mixed it with butter, olive oil, garlic and parmesan cheese. We also had salad and bread and I made enough for tomorrow too. We had pudding for dessert.

Monday we went out to breakfast at Cracker Barrel then home again and we worked out with the Wii for a while. I scan some pictures, and we went to watch our granddaughter Kacie play volleyball for her school. Her team lost both games, although she played very well.

After the game we went home to eat our leftovers and watched TV until bed time.

We will see ya down the road.

Happy anniversary. My wife & I celebrated our 25th on August 13th.

MY MY MY...I just gained another 2lbs reading your journal!!! Wii would not do me any good I would be too busy eating all that good stuff you fixed me!!! What the heck I don't look good skinny anyway LOL

Hope you are having a wonderful day.

Jesse: I've known you for 53 years.
I don't remember you looking like you do on this picture.

Congratulations on your anniversary. You were a great looking couple on your wedding day and you still are.

Happy Anniversary to both of you.
I hope you both have many many more.
Would love to hear more about your wi games in a future post.

Happy Anniversary (a day late!). I hope the coming year is full of joy and blessings!r