Our morning started with coffee and computering. I made us a quick breakfast then we got busy.

Our dryer has not been working right again, the blinking message was the lint needed to be cleaned again. So I cleared all the things around the washer/dryer and Jesse began moving it out from its place and taking parts off and gave them to me to clean.

First the flexible hose, then some kind of O ring seal and finally the S like rubber thingy. After all these were cleaned and dried he put I all back together again. I tried it out and it’s working good again. Job well done!!

I got our showers and got dressed and headed to Pueblo. Our 1st stop was Fantastic Sam’s so Jesse could get a hair cut. We were to met Adam, Kim and Gage at Walmart in Pueblo West, but Adam called and wanted to meet at Deli Dave’s for lunch and we said sure. I really like their sandwiches, we use to get them for lunch when I work in Pueblo West.

After our lunch was done we got Gage’s thing and headed to Canyon City, he was spending the night with us.

We had brought him a harmonica from our travels and he play it for us…he is actually quite good at it.

We went to Walmart in Canyon City to pick up a few things then home. After all the groceries were put away we went for a walk around the campground.

Gage and Jesse played a game of 8 ball while I sat back and watched them.

Back at the RV we sat outside and enjoyed the nice weather. It was a beautiful day sunny and 80 degrees. Gage played music for us. 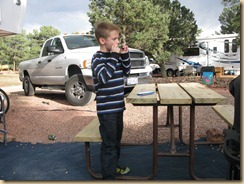 After our big lunch we weren’t real hungry, so we just grilled some hot dogs and had pickles and brownie bites for dessert. The best thing of all was we were able to eat outside. 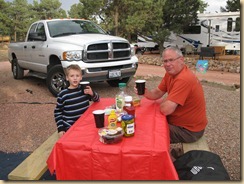 Gage playing with his fur cousins. 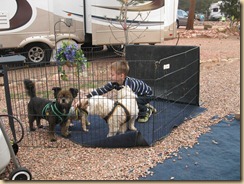 After we got everything cleaned up we decided to go in and play the game he had brought with him called CAMP. It was a board game and really not at all exciting but we played to the end I really don’t even remember who won! Senior moment?

Then he wanted to watch a movie and decided on one of the Star Wars movie. For snack while watching we all had ice cream.

It was getting late, so I got the blow-up mattress out, and made up Gage’s bed for the night. We watched for a short while longer but the guys were falling asleep. We decided to go to bed and watch the rest tomorrow.

It was a fun filled day. It was very nice to spend quality time with our third grandson, he is quite a character.