Today was my scheduled day off. This became a day off for Jesse also. He dressed and went to work, but after about 2 hours was told that they didn’t have material so no work today. Yesterday he only worked 4 hours, so he had a light week.

I left the campground around 9am and headed to the dentist in Pueblo which is a round trip of 80 miles. When I left the temperature was 50 degrees and cloudy, when I arrived in Pueblo it was 63 degrees and sunny.

I only had to wait about 10 minutes before being called into a stall. The technician looked at the three hot spots on my gums and took the partial away to make the adjustments. She brought it back for me to see if she needed to make additional adjustments 3 times. When I left it felt pretty good.

I then rode over to Kohl’s and found a few things I wanted. By this time I was hungry, so I stopped at Del Taco and had a chicken bacon ranch taco that was served on a pita. It was pretty good.

I stopped for fuel @ 3.99 per gallon, then headed to Canon City Walmart for groceries. I enjoyed time alone shopping.

Jesse helped me in with the groceries, it was a good thing he was home because the girl bagged them heavy.

After I put everything away I sat and relaxed.

We have been having a good time watching the birds. 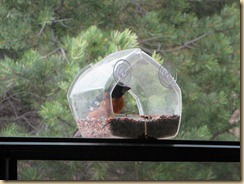 As we were just sitting and relaxing the wind kicked up and we had to rush outside to take the screen down so we could roll-up the awning. We folded up all the chairs and tables.

Within 15 minutes after we were finished the wind stopped…Go figure!

Just finished watching the 2 hour Oprah special, wonderful tribute to a GREAT LADY. Just one more show, I know I will miss her!!

I made pork taco for dinner use the leftover grilled pork from yesterday. I made Spanish rice and refried beans to go with it. While I was cutting the vegetables, Jesse made us a margarita on the rocks, nice dinner.

We clean up the kitchen and watched TV.

It was a good day!

We stayed at Mountaindale for a week last summer. We loved it there and hope to get back sometime. The entire area is beautiful