The size of Mountaindale is certainly smaller then Lake George and most guests are not from the east, but the difference in the up keep of the campground is unbelievable.

I worked 9am-5pm and the campground filled up today. We had 2 different groups along with other non-group guests. It was nice to see the grounds full.

Everyone that had stayed here before remarked at how nice the remodeling of the landscaping looked. Everyone was so nice and friendly and just was happy to be here.

Many people also remarked at how clean everything was.

At Lake George many people had nice things to say about the campground, but there were also many, many negative comments.

I know that we have only been here a short time, but I have not heard one negative comment.

I think it’s going to be a good summer!!!

After work I walked and fed the boys. Jesse was just getting off as I returned to the RV with the boys.

We along with other workers and permanent residents had been invited to Jen and Lora’s for a cookout get together. Jen’s parents were here visiting. Everyone brought something to share and they cooked chicken on the grill. I was nice gathering, but before long it became too cool to sit outside so we said thank you and headed home.

I was very tired, as it was my 1st full day of work and after yesterday I was ready to just sit.

Speaking of yesterday, I had a 10am dental appointment to have 3 teeth extracted and a new partial plate installed. The meds the doctor gave me really knocked me out and I felt no pain at all.

Today is another story. The partial needs some adjustments and is causing some real discomfort, and I will not be able to get into the doctors until Monday. It’s okay as long as I don’t try to chew anything.

Here are some pictures from the get together. 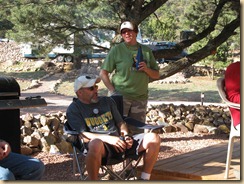 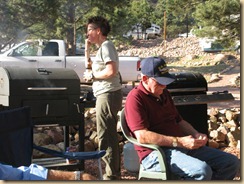 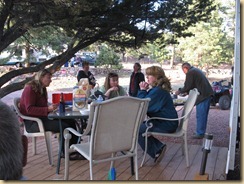 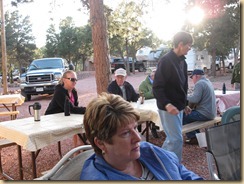 . . . as long as you don't try to chew . . . that makes for a LONG weekend! Hope the dentist got you fixed up and feeling better today!