Today was our only day off together, so we thought we would go out and do something. We tossed several ideas around, but decided to stay home and hang-out.

Jesse had previously put a new water filter system on the rig. He put the filter in the convenience center and put quick connect hose fittings. One was leaking, so while we were at Target yesterday he purchased a new one and installed it today. 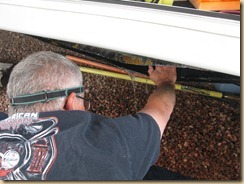 He investigated and found that the shower drain locking nut was lose and was leaking water. He tighten it and we tested to see it water was still leaking…..Hooray Dry!!! 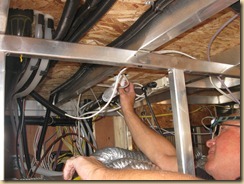 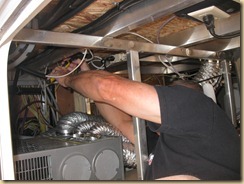 We felt that there was a lot of water so Jesse took the whole underbelly down to dry out. The insulation was soaked, so we threw it away and took out the silver insulation blanket out to dry. 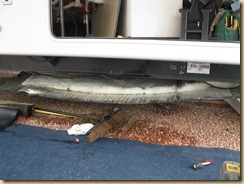 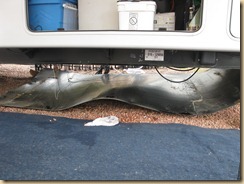 We are still not sure all the water problem is solved because it is still dripping from the frame. We are going to leave it down to see what happens.

We straighten up the basement and then just sat outside and relaxed with an adult beverage.

We watched the birds: 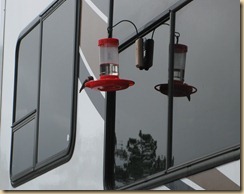 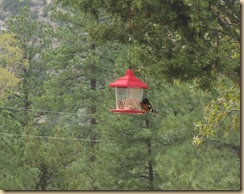 We saw a bright yellow birds but I couldn’t get a picture..it was beautiful!

The deer that strolled by 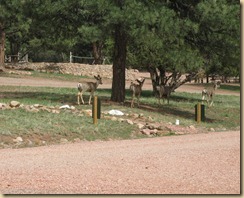 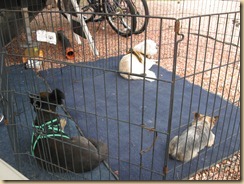 We grilled hamburgers and pork boneless ribs. I made some noodles and broccoli as side dishes. After the dishes were cleaned up we watched TV and reclined in our chairs for the rest of the evening.

The office hours are being extended, opening at 8am and closing at 6pm Monday-Thursday and 9pm on Friday & Saturday, not sure on Sunday’s closing time, I open tomorrow.

Also for anyone that I play “Farmville” with on FB, I have decided to STOP playing…..Just too much time!!!  So I will not be sending anymore gifts and don’t send me anymore.

Sounds like a busy relaxing day!!!
Have fun
Donna