After we both walked Jesse and I got cleaned up and took off for the Don-Wes Flea Market. We wanted to order a sun screen for the patio but, as they had one our size in stock. We were thrilled and purchased it.

When we left there we went to Victoria Palms Resort for lunch. This is owned by the same guy that owns our park as well as Alamo Palms Resort. Anyway Victoria Palms has a restaurant and we both ordered chicken taco salad. Mine was okay, I have had better.

After lunch we went to Wal*Mart for a few groceries. Once home I put everything away and Jesse went in search of pegs to anchor the screen.

We were all going to Carl and Linda's for cocktail time. I put together a plate of crackers, cheese and grapes. Grabbed a bottle of wine a few beers and off went went down the street. We had a good time with much laughter. 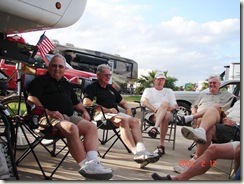 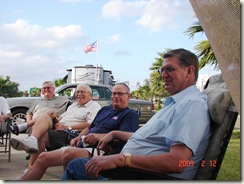 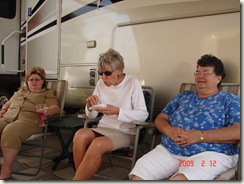 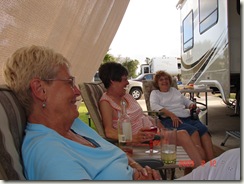 On Friday were were up and on our way to Bensen State Park for another bike ride.

There were 8 of us and it was a good time but very hot, sunny, humid day. 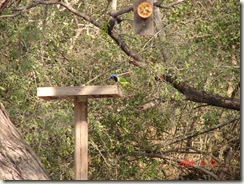 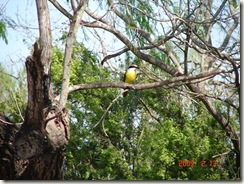 There we others but I will not bore you.

Jesse took this picture for Howard 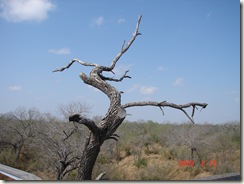 We packed a lunch and sat in the snack bar where it was cool to eat. We ordered smoothies and shared. They all laughed at me because I didn’t like the Mango and I guess I made the face of dislike.

Returning home I laid across the bed under the AC and took a short nap. :~)

Ed, Marilyn, Rick, Sherry, Jesse and I went to dinner at Lins Chinese buffet. We all stuffed ourselves, then went to the Rec room to play Double Dominos. 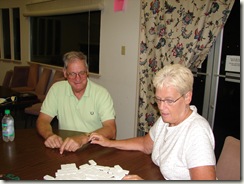 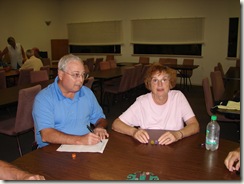 Here is Jesse and I and my new do 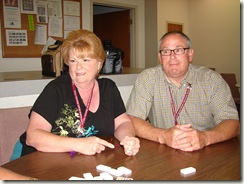 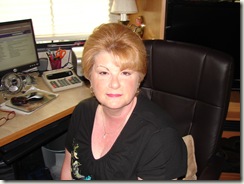 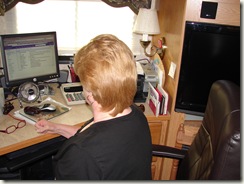 This is the shortest I have ever worn my hair.

Howard was touched that you thought of him when you saw the dead tree! I think your hair looks great! Love it!

I love the new hairdo. Looks really nice on you..

Looks like we all like your new hair cut. You have a way to go before it is as short as mine but that's okay. That wind finally got to you huh! Lynda

I've been waiting for pictures of the new "do". It looks great. Quite youthful. You look beautiful. Good choice.

Hey you look good girl! Love the way it is fixed.