We left the camp site at 7:28am and drove around to the dump station, no waiting. While Jesse was doing the blue job of dumping the tanks I walked the boys, so we were both cleaning up poop.

Here’s a picture of the Super Dome and the skyline of New Orleans as we drove out of town. 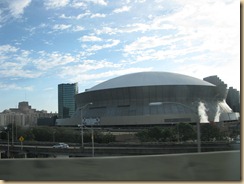 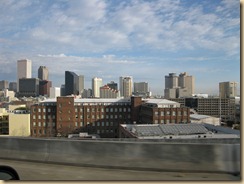 We traveled I-10 East most of the trip passing through Mississippi a new state for us. 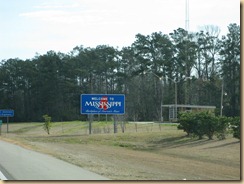 Then into Alabama (another new state, but never saw the welcome sign)

We arrived at Rainbow Plantation about 11:30 after traveling 187 miles. As we were setting up Glenn Avery came walking by with his dogs. I came out to say hello chatted for a few minutes before going back in to finish getting things set-up and started a load of laundry.

Then Darrell and Judy stopped by to confirm our dinner plans and said they would pick us up at 4:30.

Jesse was out walking the boys, but he saw them walking before they came to speak to me. They invited us to sit outside their place for awhile.

So after Jesse returned we walked over to their place. We sat outside getting caught up with them since we saw them last September at Lake George. Then they took us for a tour of the park. We stopped by the club house to look around. Then they dropped us at our rig so we could get showered for dinner.

We were going to Big Daddy’s Grill. Here are some pictures from the outside, as you can see it’s right on the water. Even though the sun was out it was still too cool to sit outside and eat. 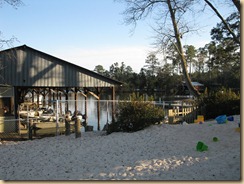 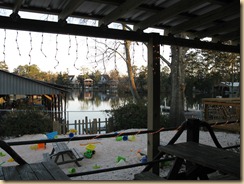 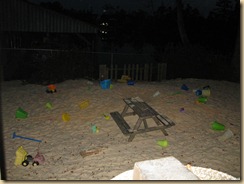 The food was very good and the company even better. We met for the 1st time. 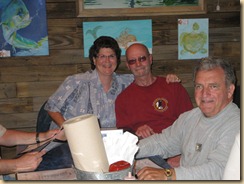 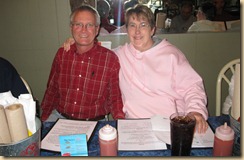 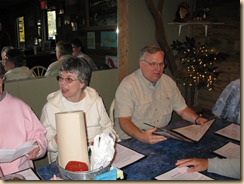 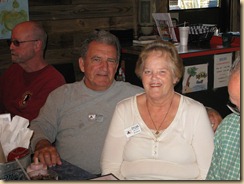 And finally Darrell and Judy 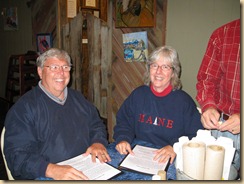 I was sorry that we were not going to be here longer so we could really sit and visit with these great people, but we need to be on our way to Maryland.

We look forward to seeing them again down the road.

Safe travels to you. Enjoy your time with family.