One of the things Jesse did yesterday while I was out with the girls was to purchase an air compressor. 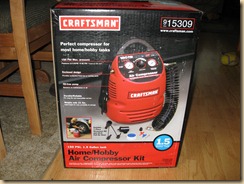 Now I was a little confused because he had one, but he said it was too small to do the jobs he needed it to do. Why didn’t he buy the one he needed in the first place? (Just one of those things women wonder about men)

Second thing he got done yesterday was to have plexi-glass cut to fit our screen door so we can have the door open to let the light in. This way even when it’s raining, hot or cool we can have the door open. He purchased the plexi at Lowes for $48 dollars. Then he took it to a glass place here in Mercedes along with the door to have them cut it to fit. He had to wait a long time for the guy to return, but it only took him about 15 minutes to cut it and charged $10.

Today he drilled holes to install the clips (cost of screen clips $6.00) that hold the plexi onto the screen door, then re-installed  the door.

Installed before the protective covering was removed. 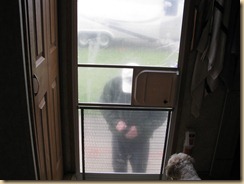 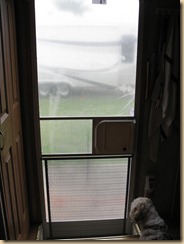 After from the inside 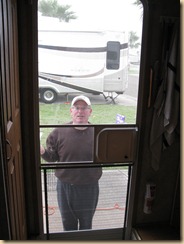 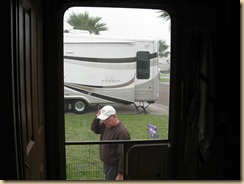 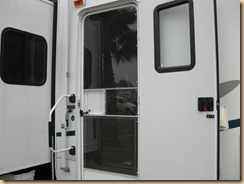 While he was installing the door I straighten up our place, you know those chores that are always there, dusting, making the bed, cleaning the toilet and vacuuming. Those chores we have even if you are in stick and brick home.

We had invited Ed and Marilyn for dinner, it was a travel day for them and I didn’t want them to have to think about dinner.

I put together the ingredients for a homemade Italian herb bread. I was also having salad and penne pasta with shrimp and white sauce.

I had all the ingredients cut up and ready to put together before we left for the airport to pick them up. Their flight left Houston a little late so they were about 20 minutes late getting into Harlingen.

It was good to see them and they had a great visit with their family and getting to know their new granddaughter Lauren.

We dropped them at their home on wheels and we went to ours, inviting them to return at 5pm.

They both gladly took the wine we offered and I had some bruschetta prepared as an appetizer.

As soon as Ed was seated he got a real surprise! As you can see from the second picture he was a good sport about it. 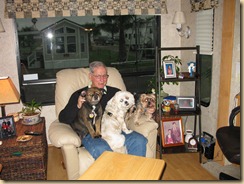 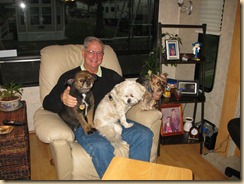 We enjoyed our dinner and the company even more. For dessert I did an easy store bought angle food cake topped with strawberries and cool whip.

They were tired as they were up early this morning, so they left right after dessert to go home and get comfy and relaxed to watch the premier of “Survivor Heroes vs. Villains” and we did the same.

The weather today was cool low 50’s, gray and rained off and on, but a good day!

Yeah! for the door. Could you please give us close up pics of the door latch area.Is this all one piece of plexiglass. We have wanted to do thisfor a while. We follow your blog everyday and ejoy it. fulltimed for 6 yrs now taking care of Lewis mom. 107 yrs old.We love the valley. We are in Gainesville Tx. 13 in snow yes. Beautiful but tired of cold