Today started like most. Jesse and I were up by 6am, walked the boys and had our coffee while talking, reading and writing.

We researched where to go when we leave here on Thursday. We think we are going to Texarkana for a couple of nights, then on to Branson arriving on Saturday instead of the planned Monday. I will make some calls tomorrow to finalize our plans.

Jesse gave me the option to stay behind while he goes to get his Texas drivers license and I took him up on it. So the boys and I stayed home. After about 15 minutes Jesse calls “where is my birth certificate?” my reply “here” “I will see you in a few minutes” says Jesse.

I met him at the truck when he pulled in and to my surprise he was not aggravated, but came in to fill out the form, then back to the tax office. I have to say that this retired life style really agrees with him. He seems much more relaxed.

While he was gone I straighten up the Kram-a-lot.
When he came back he was an official Texan “Ya’ll” 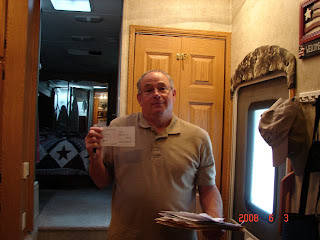 He brought Shipley Donuts. (Greg, they are suppose to be the best here in Texas) Jesse thought they were really good; I am not a donut lover, but they were good.

We messed around here at home for the rest of the day. I stayed home all day; only when out to walk the boys. For dinner I made some pasta salad and BLT’s.
I watched this cardinal play around the our site today 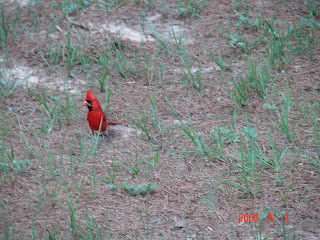 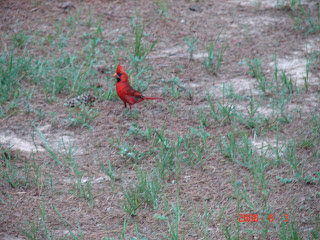 Tomorrow we have no plans, so it should be more of the same.

See you down the road
Posted by The Haman's at 8:32 AM

Glad to know we have another Texan. Safe travels to Branson and we are looking forward to meeting you.