We started the day with breakfast at the Rec Hall with E&M. They picked us up at our place at 8:00. To our surprise Ted, Sue, Dan and Pat were also there so we all shared breakfast together.

After a while Gordon and Juanita showed up. After we ate and visited for a while we were off to the Flea market. There were many booths and we all managed to find a few things to purchase.

The big purchase of the day was made by Jesse and I: 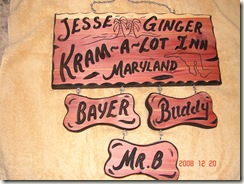 We have been wanting one for sometime and the time was now. This cost us $47!! The man does it free hand using a router and does it in 15 minutes. Can’t wait for Jesse to put is up.

Yesterday while we were having the rig washed, Jesse decided to ride my bike and broke it. Something to do with the gear shift thingy spinning into the wheel. Anyway he decided it would be best to return it because it wouldn’t shift now.

So off we went to Target. They were very busy (it was the weekend before Christmas) but we made quick work of returning the PINK one and now no more PINK. My newest bike is dark blue and silver. (pictures later)

We called Kelsey to sing Happy Birthday to her and she was getting ready to have 20 friends over for a party. WOW to be 15 again

We just relaxed for the rest of the day. We had our own happy half hour and then I made shrimp and spaghetti in the left over red sauce.

See ya down the road.

Sounds like you guys are having a blast and enjoying your new lifestyle! By the way, tell Ed that he needs to use blogspot for his daily blog. I haven't been able to get into his site for 3 days. I keep getting a Proxy error. I have no trouble with others that use My Trip Journal, just his!