Monday 15- Jesse had a date with some of the guys to have the truck detailed. It is really dirty. 4 of them took off - Ed in his Ford truck, Jesse in his Dodge truck, Gordon in his Chevy truck Jerry in his Honda CRV

The place did a real good job inside and out and it cost $35 with tip.

While Jesse was gone I took the opportunity to clean the rig. I vacuumed, dusted and mopped floors.

It was only in the seventies but very humid, so I turned on the air in the rig. After my chores and getting me cleaned up I decided to take the boys and walk up to see what Marilyn was doing.

She was looking for some recipes, but joined our walk. We walked over to the dog park. On our way back home around noon Jesse called to see where we were. He was back and the truck looked good!!

He had eaten breakfast out with the guys, so I ate some crackers and cheese.

We then took a trip to the post office. Around 3:30 we were walking the boys again, while we were out the wind started and within an hour the temperatures dropped 20 degrees.

I had planned to grill halibut and salmon for dinner, but I had to bake it instead. I also made scalloped potatoes and zucchini squash to go with it. For desert I made brownies.

We watched TV until bed time.

Tuesday 16 – The wind blew all night and the rain came with it. It drizzled all day and night and it was cold. The high was only in the forties.

At 8:30am Ed called to see if we would like to join him and Marilyn (E&M) for breakfast at Mingo’s. We met them there at 9am and to our surprise Kit and Jerry also joined us. As always it was great conversation and good food.

We all went our separate ways when we left the reataurant. Jesse and I needed to go to Wal*Mart to pick up a few things. We saw E&M there and compared food items in our carts. They were making ham and beans, while I planned chicken chili. Jesse changed my mind to chicken pot-pies, french fries and biscuits.

Once home I did a project on the computer, while Jesse surfed the net on the other. It was a very lazy wet day.

Walking the boys it not fun in this weather at all, although I have to admit, Jesse did most of it today.

I have no pictures from the past two days, so here are a few I will share.

My very PINK bike, have I mentioned I hate PINK! 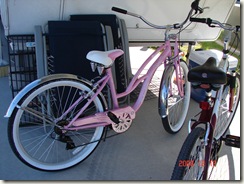 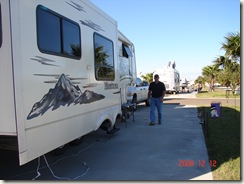 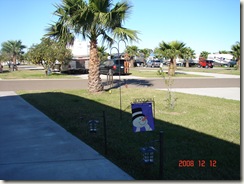 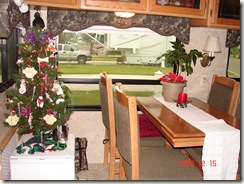 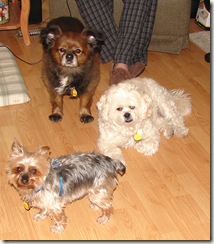 Tomorrow we are suppose to have the rig washed and waxed and I have to go to the post office again.

Until then See ya down the road

You guys seem to be having a good time. Maybe the weather will get settled down here in the next week or so?? We have had cold temps and wind here for the last 4 days. I want warm weather!!!